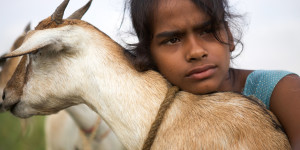 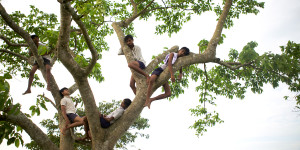 TORONTO:  Village Rockstars premiered at the Toronto International Film Festival (TIFF) on September 8 with director Rima Das in attendance.   The film is set in her home town Chhaygaon near Guwahati and revolves around a 10-year-old girl Dhunu living in a remote village in northeast India who fights against stereotypes and poverty to pursue her dream of owning a guitar and forming a rock band.

Dhunu grows up with her mother and navigates the mysterious ways of adults and boys. The same boys who want to join her in rock star glory tease and mistreat her because she’s a girl. Her mother is a strong figure in her life, but seems to have little patience for her daughter’s extravagant dreams. It’s only when Dhunu sits at the feet of a village elder as he describes how to unlock the power of thought that she begins to glimpse how she might achieve her boundless musical vision.

Das’s second feature with a local nonprofessional cast is an appealing portrait of a young girl finding her place in a world made for boys and men.  The story is hers, she says, where she knows the characters well.

“When I went to my village, I found that the people were happy despite being so poor,” says Das who has captured the  marshlands and village textures in the  widescreen camerawork. When the rains come, they drench Dhunu and her playmates in scenes that are original and pure.

It took Das around five months over three years to shoot the film as she did the shooting herself.

“”Children of my village live a great life and this story is about joy, vision, finding hope and beauty in ordinary things, simple things and discover what is beautiful.”