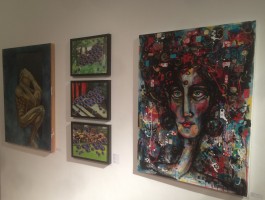 BY MAIRI MCGOWAN
TORONTO: Toronto’s popular Art festival by Scotiabank – Nuit Blanche – on October 3 marked the tenth anniversary of the festival, and much like a ten-year-old’s birthday party, attendees were up well past their bedtimes.

The 2015 edition featured over 110 works spread throughout the downtown core, with clusters at Nathan Phillips Square, OCAD, Queens Park, and along the recently reopened Waterfront. For the first time in the event’s history, all the independent projects were curated under a theme – one that mirrored Che Kothari’s featured exhibit 10 for 10th – Memory Lane.

Some notable works included Shoes That Line the Lane by Cyril Williams that invited passersby to donate nostalgia-provoking shoes by hanging them on an overhead wire, turning a common sight into a physical representation of memories. Nathalie Quagliotto’s Maturity Spin allowed people of all ages to revisit childhood with a turn on her installment of merry-go-rounds, and eager gamers lined up for an hour apiece to try their hand at Ubisoft’s Pixelate, an interactive tour of video game history that incorporated virtual versions of the participant and images of Toronto. 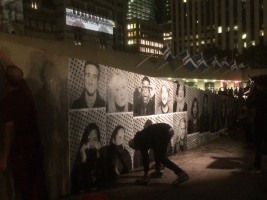 Arguably one of the most popular projects was at Nathan Phillips Square: JR’s Inside Out, which has gained international acclaim for its political weight and interactive nature. Thousands of massive black-and-white portraits of Torontonians were plastered onto the ground and structures in front of City Hall, some of which were captured in the weeks leading up to Nuit Blanche, by means of photo booth trucks. The result was a collage of the city’s diverse population and a contribution to what is currently the largest art project in the world, which comprises over 250,000 participants.

With so many projects, a 12-hour window, and a scattered map to consider, conflict of choice often came into play and left many feeling as though they’d missed out on most of the night’s offerings.

“I didn’t see as much as I could have, but was impressed by what I managed to find,” said Aidan Campbell, a new Torontonian and student of law at the University of Toronto, whose greatest critique was that “interactive art proves to be difficult when there are thousands of people all trying to get in on it.”

“The map made it seem as though there were so many things, but after several hours, I somehow only encountered a handful of projects,” said Marissa Heintzman of her first Nuit Blanche since moving to Toronto last month. “I definitely enjoyed the experience, but found it hard to navigate.”

In anticipation of these concerns, the official Scotiabank Nuit Blanche website offered a personal Itinerary planner, and advised attendees to visit during off-peak hours. 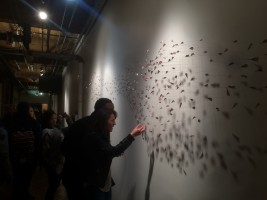 “I think my move next year will be to pick a small, random area away from the crowds, so I don’t spend all my time fighting traffic,” said Heintzman, who thought highly of 401 Richmond’s 30-project event Built For Art: A Living Archive. “I liked [401 Richmond] best because I could actually move through the gallery and enjoy things, while stand-alone projects with huge lines were disappointing.”

For those who missed the event this year, organizers have listed 14 projects of the original 110 that will remain on display until October 12, including the much-discussed Inside Out. 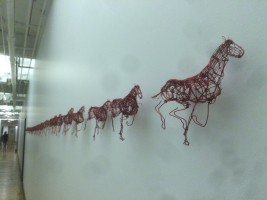 Nuit Blanche – which translates from French as “white night,” but refers also to a “sleepless night” – is an interactive, all-night culture and contemporary art festival. It originated in Paris in 2002 under Mayor Bertrand Delanoë and was organized Jean Blaise, a heavyweight in French cultural development. The festival spread globally, and eventually took root in Toronto in 2006 under the efforts of Mayor David Miller and Executive Director of Culture Rita Davies.

The inaugural Torontonian Nuit Blanche attracted 425,000 spectators in 2006 and the annual event has gone on to gain popularity with spectator turnout surpassing the 1 million mark in 2011.