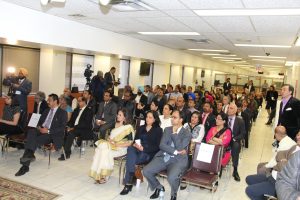 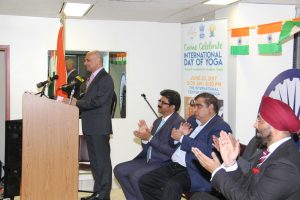 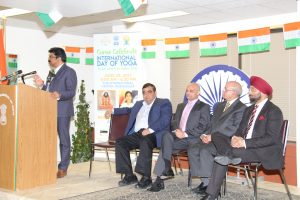 World Renowned Baba Ramdev and Sister Shivani  are expected to be in Toronto on Sunday, June 25, 2017 for International Yoga Day celebrations, anticipated to be the largest in North America.  With an estimated participation of nearly 10,000 people, the celebrations are being held at the International Centre in Mississauga organized by International Yoga Day Canada (IYDC), a Canadian not-for-profit organization.  The program will be televised live globally through broadcast and social media and is expected to reach an audience of millions across North America and India.

“International Yoga Day aims to raise awareness of the many benefits of practicing yoga,” said Indian Consul General in Toronto, Dinesh Bhatia, Chief Honorary Patron and Head of the Advisory Board of the IYDC.  “The draft resolution establishing the International Day of Yoga was proposed by India at the United Nations and was endorsed by a record 177 member states. The proposal was first introduced by Prime Minister Narendra Modi in his address during the opening of the 69th session of the General Assembly,” he said, adding that “Yoga is not just about exercise; it is a way to discover the sense of oneness with yourself, the world and the nature.’’

IYDC was founded in 2015 to propagate and popularise the practice of yoga in Canada.

“The 2017 International Yoga Day celebrations are coinciding with Canada’s 150th birthday. Through our program we want to take the benefits of yoga to all Canadians to promote wellness and build a healthier and happier Canadian society,” said Satish Thakkar, Chair of the Board of Directors, IYDC.  “IYDC’s 2017 celebration of the International Yoga Day will herald a new beginning in broadening the acceptance of yoga in Canada.”

According to organizers, alternate approaches to health care include techniques such as yoga that occupy a prime place as one of the most effective and popular disciplines.

“It is widely acknowledged that yoga has a positive impact on health and therefore health care. Yoga enhances productivity and contributes positively to the economy. It can also directly contribute to the nation’s happiness and creativity,” said Thakkar.