VANCOUVER: The haunting baritone voice first catches my attention.   It was an old Mehdi Hassan song waking up the stillness of Stanley Park right across from the Teahouse.   With the ocean on one side and the famed restaurant on the other, the bride walked the narrow pathway with the flower girls showering petals on the path.  After the short ceremony with 20 people in attendance, the bridal party moved to the fancy Teahouse to party and celebrate the occasion.

“It’s so fancy and scenic,” said a guest said of the Teahouse in the midst of Vancouver’s Stanley Park.  “What a view!”

And certainly the upscale restaurant was a ‘room with a view’.   Established in 1978, the venue offers a seating of 200 with incredible ocean views from the patio, the summerhouse with the glass roof top and an inside room with glass windows all around.

The décor is simple, but artistic and tastefully done.    A wrought iron chandelier hangs from the ceiling, a painting with pears is placed strategically on the wall and adds to the ambience.    A chatty and pleasant server who resembles Neil Patrick Harris, serves us while taking photos on demand of the guests and tells everyone he studied journalism, more specifically, as a photo journalist. 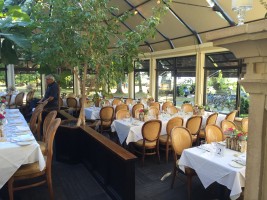 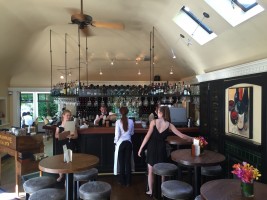 Originally built as a garrison and officer’s mess during the 2nd World War, the Teahouse was used as a residence for the military after the war.   In the 1950s, it was opened as the Ferguson Point Tea Room in the summer.   The new owner renovated it from 1976 to 1978 and opened it as the Teahouse Restaurant.

The seaside landmark is minutes from downtown Vancouver and boasts an outdoor fireplace on the restaurant’s patio, which looks out to sunset views of Georgia Strait from the western tip of Stanley Park.  One also experiences the longest sunsets in the city while dining. 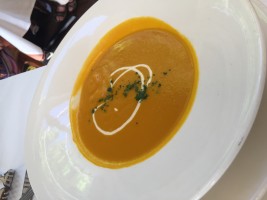 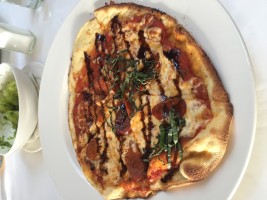 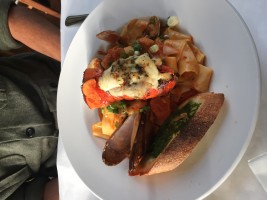 The contemporary culinary experience provides an array of food using fresh local ingredients.  One can order a Cheese Plate with a selection of cheese served with onion jam, have a carrot soup with coriander and creme, accompanied by a Chorizo Pizza or Chef Annabelle’s Fish and Chips.   Its all a heavenly experience for the palate.

The restaurant represents Vancouver and is a must visit.