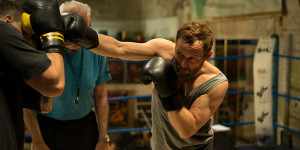 BY RENU MEHTA, TORONTO:  The Most Beautiful Couple, a film by Sven Taddicken was presented at the Toronto International Film Festival (TIFF) that took place in Toronto from September 6-16 this year.

The film is about two young teachers, Malte and Liv, who are spending their summer holiday on the Mediterranean coast when they are attacked by three young men. The incident escalates and Liv is sexually assaulted. Two years later, Malte and Liv are not only still together, they demonstrate an amazing strength in dealing with the traumatic experience, determined that it will not drive a wedge between them. But when Malte encounters Liv‘s attacker purely by chance, he finds himself driven to seek revenge and justice, and sets out in pursuit. However, the longed for confrontation occurs too soon, before Malte has told Liv, let alone the police, and the young couple‘s fragile relationship, which they have fought so hard to preserve, is put to the test once more.

“Why did I make this movie? I was impressed by the story of Liv and Malte, who courageously faced the consequences of sexual assault, although they soon reached their own limits – limits which they as thoughtful and open-minded people could not bring themselves to admit for a long time. While writing the script, I was always faced with the question: “How would I have behaved in this situation?” says Taddicken, director of the film in his press notes.

Taddicken speaks about the film about why he chose this story.

This is the first time you directed a film that you wrote yourself. What made you choose this story?

The premise of ‘The Most Beautiful Couple’ felt like a worst-case scenario for any loving couple. It was like a nightmare that kept haunting my thoughts. So I finally sat down and started to think it through, while wondering, if there is a cure for that couple. I guess it‘s that same energy that kept me writing that also keeps the audience tied to the film. In terms of writing and directing … I worked as a director for the last 10 years, but the truth is, I did miss a certain feeling of urgency when making those stories. And now that I have directed my own screenplay, I feel it might be hard to go back to just directing – because I really enjoyed it and I truly believe that you should have a good reason to tell a story.

What were the biggest challenges in the entire making of the film?

The very first scene, the assault, was a big challenge to me, the actors and the crew. It was also the very first scene that we shot, because I wanted the actors to know what they were talking about, when they refer to the assault later in the film. They agreed to this idea. Shooting the scene then turned out to be astonishingly smooth, because everybody had a lot of respect for each other. We rehearsed the scene several times. And the DOP and I were aware of every camera and character movement before we started shooting. So nothing was left to chance, which gave the actors the security to be insecure in the scene. I’ve experienced this before: when everybody, including me, is scared of a certain scene, everybody prepares well, and is often full of empathy. It‘s the less important scenes, that are often harder to shoot. Or those when you don‘t manage to find the time to rehearse and prepare yourself.

Does ‘The Most Beautiful Couple’ refer to something you’ve experienced personally?

I‘ve never been involved in a sexual assault – no. Fortunately not. Though it is my duty as a storyteller to put myself in the position of every character involved. The scene that actually refers to my personal life is the fight in the kitchen between Malte und Liv, when Liv says that Malte would be a real man if he’d never told her about meeting the rapist again. This scene is basically a re-write of a terrible fight I once had right before a breakup.