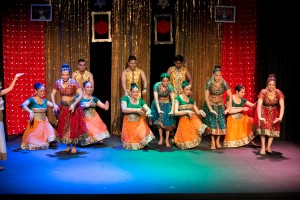 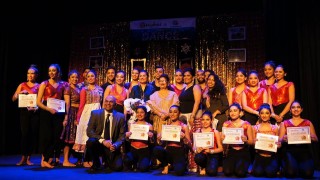 Mississauga: Dance Diaries with Saroj Khan – a four-day workshop with Bollywood’s ace choreographer concluded with aplomb culminating in a Grand Finale performance by the students and their beloved Masterji – Saroj Khan who danced to some evergreen popular classics including Chane Ke Khet Mein from Anjaam, Kahin Aag Lage from Taal and Dil Cheez Kya Hai from Umrao Jaan.
The Grand Finale, which took place at the Maja Prentice Theatre in Mississauga, showcased the dance skills and techniques of Bollywood dancing learned by the participants of the Toronto workshop.
Sanskruti Marathe, a resident of Brampton, who participated in the workshops, said that the experience of learning from such a legendary choreographer was wonderful. “I’ve learned so much about expressions, about the beat, about postures and dance positions. It’s a once in a lifetime experience and I’ve enjoyed it a lot”, she said.
Another participant Sanchit Mathur from Richmond Hill said he felt privileged to be part of the workshop. “We have been watching her choreography even as kids and she is just the best in the industry and the best in the world and we are so happy to be here.”
Dance Diaries with Saroj Khan is a unique endeavor by Sanskriti Arts and Imagebuilderz for Bollywood dance fans to learn the art of popular dance under the tutelage of one of Bollywood’s best choreographers’ and get a once in a lifetime opportunity to perform with the choreographer on stage during the final showcase. 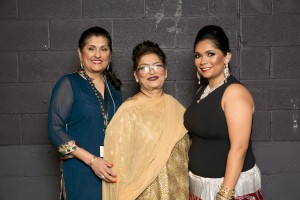 “Bollywood is taking the world by storm…we have prominent Bollywood stalwarts like Priyanka Chopra walking the red carpet at the Academy Awards. And so when Puja and I decided to do Dance Diaries, we thought what if we could bring Bollywood dance to Toronto and give the talent in Toronto an opportunity to train in a style that is so popular worldwide, across all communities. And who better to represent Bollywood dance than Saroj Khan herself, the maestro of choreographers…the leader in dance revered as pioneer in Bollywood choreography.” said Renu Mehta, president of Imagebuilderz.

The first event of its kind in Canada, Dance Diaries allowed Bollywood enthusiasts to train with leading dance director Saroj Khan who is credited with choreographing some of Bollywood’s most popular numbers including Ek Do Teen from Tezaab, Dhak Karne Laga from Beta and more recently Gun Guna Re from Agneepath and Dil Mera Muft Ka from Agent Vinod.

The workshops were conducted as full day and one on one sessions between March 25 and March 30 in Toronto and allowed students to learn directly from Saroj Khan the moves to some of her evergreen popular classics.

These four days have been an incredible journey”, said Puja Amin, founder of Sanskriti Arts. “If I have to liken it to something, I would say this is like being born again, we have been introduced to this world of expressions and little life lessons that will be remembered forever. Assisting Masterji has also been a memorable experience for me and of course ..sharing the dance platform with Masterji.”