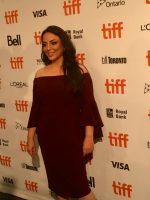 TORONTO: Bollywood and Hollywood actress Priyanka Chopra was the tenth person that Paakhi Tyrewala approached with her script for Pahuna – The Little Visitors which has now been presented at the Toronto International Film Festival (TIFF) this year.   A film about Sikkim and the North East, the story is about two children that perches between realism and fable as it unfolds a story of children attempting to survive in the woods all by themselves.

“Sikkim is such a small territory in India and for it to have a world premiere at TIFF, I feel extremely proud,” said Chopra.   “The fact that this is a film about Sikkim led by two children from Sikkim and a film being made by a female director makes me very proud.  That’s what I stand for – girl love, and to encourage and appreciate women in entertainment,” said Chopra at the festival.

Produced by the global megastar along with Madhu Chopra, her mother and producing partner, The Little Visitors is the latest in a planned series of films drawn from Indian regions underrepresented on the big screen.

The film revolves around a story about innocent children performing near-miracles in order to survive while capturing the innocence and spontaneity of the child leads and the beauty of India’s northeast.

“13 years of teaching has taught me a major life lesson, that children are easily influenced and impacted by adults. One might not realize it but every truth or lie coming out of an adult’s mouth is gospel for a child. Their actions are unquestionably accepted as right and copied by a child. Further, in any conflict, the most effected are children. A change in the regime, political ethos or war impacts them the most. A few bits of fake news and they gulp it down without a second thought. Pahuna: The Little Visitors addresses these influences with a light heart,” says director Tyrewala who wrote the story several years ago and then rewrote it several times before it was finalized.

The casting of children for the film took almost a month for the director.

“These are untrained kids from a small village from a small state in north east India which doesn’t have a film industry.  So for the actors to be able to do a performance like this without ever being exposed to something like this, that is such a testament,” she says.

Hope and optimism is sol lacking today and this film also talks about peace which is so important right now, said Chopra.

“The story is especially relevant for today’s times,” says Chopra.  “It deals with a problem that we face world over – terrorism, displacement and religious superstition. The film tackles the fear and chaos that arises from these issues and the effect it has on innocent families at large, when people are made to leave their homes and take shelter across the border or nearby safe places. It’s no longer restricted to a specific country, and is therefore relevant to a worldwide audience. Whether we are facing the situation ourselves personally or are witnessing it every day on the news, we are all somehow involved. “

“When I turned producer with Purple Pebble Pictures, I wanted to erase boundaries and create an environment where the content and story is the hero. At the end of the day, we are storytellers and that is only enhanced by being able to tell stories in varied languages. Regional cinema in India has such amazing depth and great cinematic talent and that is where we made our beginning. India is a country filled with exceptional young talent and it is also our endeavour is to provide a platform for talent across the entertainment business to showcase their abilities. With ‘Pahuna’ and our talented director Paakhi Tyrewala, both these objectives were met… we had a great story and a wonderful young team who were making their respective debuts with this film. Pahuna: The Little Visitors is a brave story about the love, strength and courage of three Nepali children who get separated from their parents, while fleeing the Maoist agitation from Nepal to Sikkim,” said Chopra.

“As an actor, I’ve had the privilege to essay a wide variety of characters, working with the best names in the business. Those experiences opened my mind and heart to the creative process and the magical, collaborative way a film is brought to life. Today, entertainment has a wide canvas which is not restricted by language or medium.”

The entire cast and many of the technicians are from Sikkim and according to the director, this is the first Sikkimese film ever.

“Sikkim is a small state in India.  Even in India, it doesn’t find a voice.  When I made this film, I wanted my people to be heard and this film is for me, our people, for Sikkim, and it’s a great honour to be here,” says Paakhi A. Tyrewala, director of the film at TIFF.