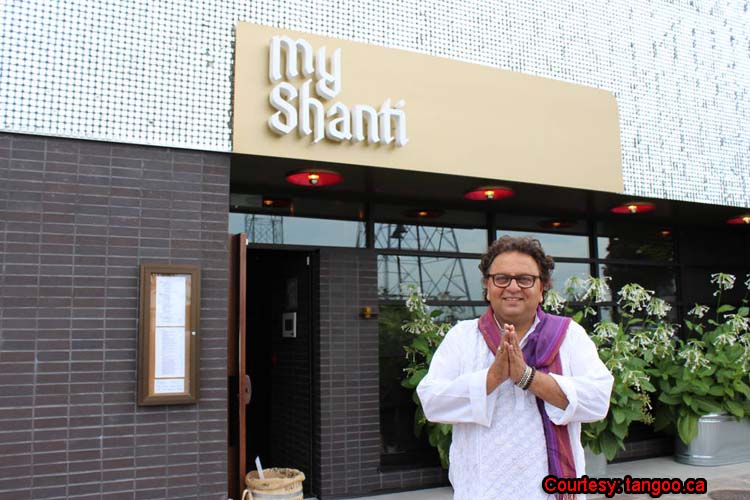 Vikram Vij in front of My Shanti restaurant in Vancouver

VANCOUVER: My Shanti (my peace) is not just a restaurant here.   It’s a venture, a journey, a dream envisioned by one man.

A dynamo of a man called Vikram Vij – who set foot in Canada, first in Banff and then moved to British Columbia to adopt Vancouver – is behind this fabulous Canadian immigrant success story.

A passionate advocate of the diverse cuisine of India, this celebrity chef and Dragon Den judge has a mandate to change the palate of the Canadian community and introduce Indian food as a weekly staple in the country’s households.

“India has such a rich diverse heritage with much to offer in terms of culture and cuisine. My dream is that Indian food should be prepared and eaten once a week by Canadians, just like people may eat pasta, for instance,” says Vij.

While downtown Vancouver on Granville Street is host to two restaurants that are frequented by tourists, one called Vijs and the other Rangoli, this is the first restaurant Vij has opened to woo the suburban community.

Speaking compellingly, with energy and persuasion, Vij drove us from downtown Vancouver to Whiterock in South Surrey where his new glittering restaurant was situated. It was glittering, really, the spanking outer walls sparkling with 55,000 sequins to give a Bollywood effervescence to the concept.
“My Shanti is a reflection of the personal and culinary journey that I’ve taken with friends throughout India. This restaurant is a homage to the diversity and richness of Indian cuisine,” said Vij, as we approached the entrance.

Chatting easily with a couple passing by who were debating whether they were dressed appropriately to dine at My Shanti, Vij’s easy conversational style persuaded them to step inside.

It was a classy restaurant, no doubt, and the unique décor as one entered confirmed the belief. 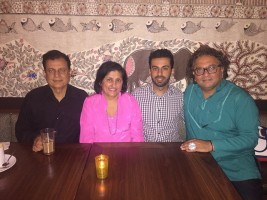 The author (second from left) inside My Shanti

Several fabrics adorned the ceiling where the Indian materials hung tastefully, embellishing the decor.  An entire wall was covered with a Madhubani tapestry by Kamlesho fabricated from a single piece of cloth that added to the essence of India.   Walking further, a small bamboo space revealed it was the tea station and also housed the cash register skilfully hidden from the naked eye.

“Most people hang saris from the ceiling, but we decided to do things differently,” said Vij as he escorted us further into the restaurant.

A few steps away the outdoor patio beckoned us with its narrow manjis or cots often found on wayside dhabas (eating places) on highways or interstate roadways in India.   The colourful cushions looked inviting and comfortable for enjoying an evening over a glass of wine with friends.    A jhula (swing) was set in a corner where one could sit and gently rock while watching the sun set.

While the inimitable trimmings are representative of the distinctiveness of the man himself, it’s the food at My Shanti that provides the perfect experience.  The blend of food is very diverse, spiced up from all regions of India.  One can have a cold soup of watermelon mixed with tamarind (whoever thought that may be a combination), or a chicken dish spiced with garam masala (an assortment of spices that Indian women use to add the final touch in home cooked meals and without which a meal is incomplete). 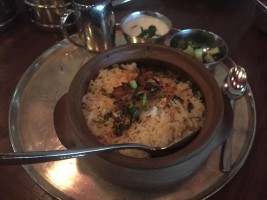 The food at My Shanti will send your taste buds racing.

“My explorations took me from the kitchens of home cooks and executive chefs to the ubiquitous street food stalls, exchanging ideas and discovering spice mixtures, ingredients and techniques,” says the Chef de Chef as he moves from table to table to converse rapidly and easily with the guests.

“Do you like the Kashmiri naan”, he asks one and then goes over to someone else and says “try this”, as if he has invited people to his home and he is hosting the dinner.

The delightfully served cocktails have been christened with unusual names like Anarkali, Badam da Nasha and Zindagi Na Milegi Dobara (the latter is replicated from a very popular Bollywood film).  Whether you order Mussels from the Konkan region in a coconut red chilli curry, with spicy cassava fries or a Jackfruit and cabbage Thoran from Mysore with coconut and kalonji seeds, one is sure to get a new taste, a new style of cooking and a new aroma.

“Each dish has been chosen to represent the uniqueness of a particular region’s cuisine,” he says with passion.

The best part is that the Punjabi Dal and Saag Paneer with chapatti is served tiffin style and is actually brought over to the table in a lunchbox (available in most Indian homes) and the tea is served in a glass the same way as is done in the small eating places when you visit India.

“I hope the bold flavours and our style of cooking, along with the passion that we bring to each dish, will excite your palate and arouse your senses,” says the owner of My Shanti.

“It’s a jewellery store for food.  The best gold you will have,” Vikram Vij says matter of factly, knowing fully well he has been proclaimed the celebrity chef of Indian cuisine in Canada.