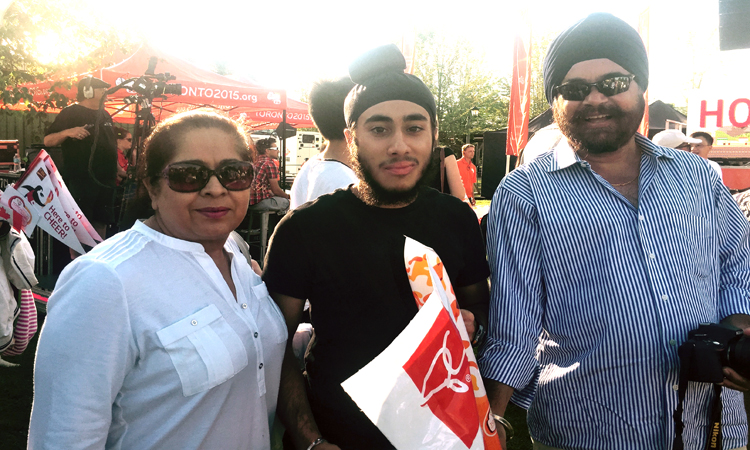 Kiran Kalsi (left) with her family

RICHMOND HILL: Kiran Kalsi stood with her family in the Richmond Green Park at Elgin Mills in Richmond Hill, proudly watching the Pan Am flame being carried by Elvis Stojko, the Olympic and World Figure skating champion.

Kalsi joined hundreds of people from all communities in cheering the skating legend to be the torch-bearer for the upcoming Pan Am/Parapan Am Games.

”My older son used to skate with Elvis in Richmond Hill when they were younger,” she says. “I have several pictures of the two of them.” The Indo-Canadian came to Canada 40 years ago as a 16-year old. Like thousands and thousands of Canadian immigrants, she feels she is a full Canuck today.

Her journey began in Nairobi where she spent her formative years before her family decided to move to Ludhiana in India and onward to Toronto. The youngest amongst her siblings, Kalsi found it hard to adapt to High School in Toronto.

“It was difficult to make friends at first because groupings are made from the early years,” she said. 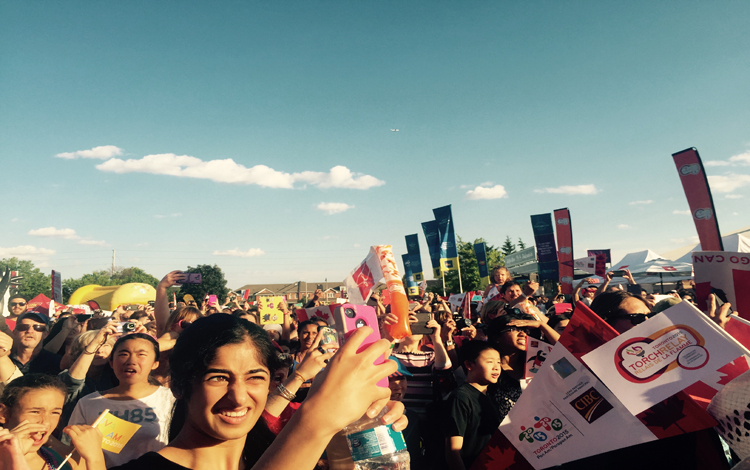 Crowds cheer and click Pan Am Games flame in Richmond Hill on Wednesday.

Today, she is a resident of Richmond Hill where she has raised three sons, with her youngest just graduating from High School. The family is well settled and entrenched into Canadian society and are happy to call Canada their home. Standing with the crowds of people, Kalsi stood and cheered Stojko as he carried the flame for the Games that take place from July 10 to 26, involve 16 municipalities.

For Stojko, whose mother is Hungarian and father is Slovenian, it was a proud moment too.

“Back in 1988, I was a junior champion and Olympics was a big thing for Calgary. The flame came through Richmond Hill and they allowed me to hold the flame right on stage and my Mom took pictures. It was awesome. We went home, and there was no film. I remember the moment,” he told the crowd.

“So many years later, I am able to carry a flame to this part and it probably literally took me about 8 minutes from where we held it. So this means a lot to me. Im back in my home country with my beautiful wife to share this day and thank you so much for choosing me to carry the flame in Richmond Hill. It’s such a proud moment.” More than 7,000 athletes from across Central America, South America, the Caribbean and North America will compete in 36 Pan Am sports and 15 Parapan Am sports.