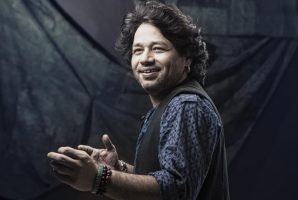 He may be 5′ but people call Kailesh Kher a tall man. The Indian pop rock and Bollywood playback singer presents his music with style and oomph and captivates audiences all over the world with his unique musical talent.   The prominent singer, with a music style influenced by Indian folk music and Sufi music, sings in several languages and is now coming to Toronto.

“I’m coming to your city on September 3 at the Meeting House in Oakville,” says the musician whose musical prowess has mesmerized audiences for decades.   The prominent singer, who sings in Hindi, Punjabi, Tamil, Telegu, Kannada, Urdu and Rajasthani languages, has significantly contributed to Indian music by qualifying as one of the leading contemporary Sufi singers.

“You don’t want to miss “Kailash Kher”-Live in Concert,” say Ajay Sharma of AJ Media Entertainment INC who is promoting the event presented by Minhas Lawyers and Minhas Films and Productions. “His music is unique and mesmerizing.”

Having sung more than 70 songs for the Indian film industry, Kher is known for his unique and powerful voice, style and music, and has been established as one of the most successful and popular singers of India.  Inspired by classical musician Pandit Kumar Gandharva, Pandit Hridaynath Mangeshkar,Pandit Bhimsen Joshi, and the renowned Nusrat Fateh Ali Khan , the musician is the recipient of two Filmfare Awards for Best Male Playback Singer for Fanaa (2007), and for the Telugu film Mirchi, along with several other nominations.

The Kailash Kher -Live in Concert is being held on September 3 at The Meeting House, 2700 Bristol Circle, Oakville, and is presented by Minhas Lawyers LLP,Rupinder Minhas, Minhas Films and Productions.

Some Facts about Kailesh Kher: