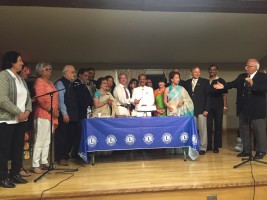 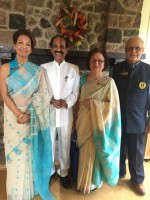 The secret to a long life and good health lies in having cow’s ghee every day and following six fundamental principles, says Indian doctor Dr. Pankaj Naram.    Speaking to a Toronto audience at the Banbury Community Center in North York at an event organized by TNLC-Toronto Netralya Lions Club, the master Healer, as he is popularly known, shared home remedies and ancient Indian Siddha-Veda Secrets.

“Vibrant health and peace of mind is your birthright,” said Dr. Naram on May 4 to members and guests of the Lions Clubs International, one of world’s largest service club organization with more than 1.3 million members in approximately 45,000 clubs in more than 200 countries.     “The six fundamental principles are Diet, Home Remedies, Lifestyle, Herbal remedies, Marma and Ashta karma that cleanse your system of toxins.”

The Master healer also said that following these principles would improve the three doshas: Vata, Pitta, and Kapha, biological energies found throughout the human body.

“To be truly happy you have to be eternally free of disease,” he said as he shared several simple home-made remedies with the audience for arthritis, asthma, Parkinson’s disease, improving memory and vision as well as a host of other problems.

The healer who changed his life to help other people said his early years were not good, when he was often depressed and felt life had no meaning.  After meeting his 115 years old Guru,

Dr. Naram turned his life around, first losing weight from 220 lbs. to his current 115 lbs.

“I had a budding desire to change the world.  I wanted to be a healer with ancient secrets, but didn’t know how to do that,” said the 61-year old whose birthday on May 4 was also celebrated with a cake presented by the Lions Club.     “I strongly believe in giving energy and creating energy.  And I say, whatever you do, do 1000 percent.  And when you do that, the supreme power will also help you, guide you.”

Thousands of people across the world including the Dalai Lama, Mother Teresa, and the victims of 9/11 have requested the authority in ancient Siddha-Veda Secrets including pulse reading and marma shakti, to use the ancient secrets he has been entrusted with to transform their health and peace of mind.

Lion Kanta Arora, First Vice President thanked Dr. Naram and presented a cheque for $500 as a token of appreciation for  the Orphanage institution run by “ Dr. Naram Foundation” and an appreciation plaque.   Thanking Lion members, she also acknowledged everyone for their ongoing support for helping Lions make a difference in the community.