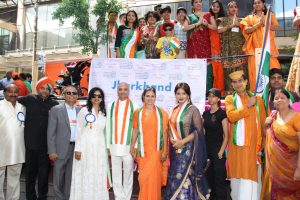 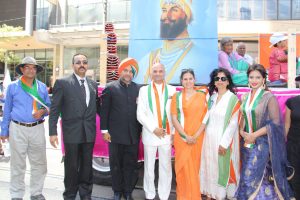 BY STAFF REPORTER, Toronto:  More than 50,000 people are expected to converge at Nathan Philips Square to celebrate the 19th Annual India Day Festival and Grand Parade on Sunday, August 19, 2018.   Organized by Panorama India, with the support of Consulate General of India, the all-day event to celebrate India’s culture and heritage will present music and dance performances, a kids zone and an international bazaar with 100 kiosks exhibiting fashion, jewellery, handicrafts and an array of food.  The King of Bhangra Malkit Singh, Indo-Canadian singer Parichay and Indian Actor Pukhraj Bhalla will be on hand to perform for the massive crowds.

The event kicks off with the National Anthem at 1pm followed by the Grand Parade, marshalled by Bollywood actor Jimmy Sheirgill.  According to organizers, the grand parade will have 20 floats representing the various States of India put together by the diverse number of cultural groups in the Greater Toronto Area (GTA).

The parade will begin at Nathan Phillips Square, journey west to University Avenue, turning North to Dundas, East to Yonge Street, South to Queen Street and culminating back at City Hall.

Consul General of India in Toronto, Amb. Dinesh Bhatia will preside over the India Day event with participation from several political dignitaries from all levels of government.

More than 100 community organizations are expected to participate in the festival.

“This free community event has something for all ages!  Our purpose is to bring together the local Indian community through the celebration of unity in diversity.  For more information, visit www.panoramaindia.org,” says Anu Srivastava, president of Panorama India.

Panorama India is a not-for-profit umbrella organization to help unite various Indian cultural associations and groups, project a common identity based on their Indian heritage, and celebrate Unity in Diversity. Established in 1999 with the support from Consulate General of India, Toronto, the organization has a mandate around three pillars – Celebrate, Collaborate and Educate.