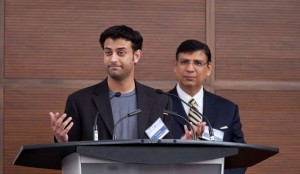 TORONTO: If you are a new immigrant and have a Canadian Dream, then think like Haroon Mirza.

But who is Haroon Mirza? Well, he is a self-made multimillionaire. Just by the age of 29!

He and his two friends created a company and within four years they sold it to Intel for millions – some say for $25 million.

Can’t believe it? Here is his true story.

Mirza, whose family comes from Pakistan, was born in Britain. Then he spent his childhood in the Middle East and when he was 13, his family landed in Ottawa in 1995.

After finishing his school, Mirza went to Carleton University in Ottawa to earn his B.Com, majoring in corporate finance. And in 2004, he moved to Toronto to join Cadbury as a financial analyst.

By early 2006, young Mirza was already a senior financial analyst at Cadbury, but he decided to chuck his job and become an entrepreneur.

“I always wanted to be in business. Though I had a job, it was not fulfilling. I was not building equity in myself. I wanted to take control of my destiny,’’ says Mirza.

“I knew being an entrepreneur will give me the freedom to do what I wanted to do,’’ he adds.

Having chucked his job, Mirza joined hands with two partners – Dr Shahzad Malik who holds a Ph.D in computer science and Faizal Jever who was a business student – to embark on his entrepreneurial mission.

“Three of us brought different strengths to the table. We did a lot of brainstorming and kept pursuing different ideas. Ultimately, we learnt that we wanted to be in the digital signage retail industry. You know when you go to a store, you see digital signs. I felt this industry was feeling the pain – they were not understanding how effective their in-store digital advertising was,’’ says Mirza.

Mirza and his partners decided to create sensor-based digital technology that will tell retail stores how many people entered the store and at what time of the day, how many were actually looking at in-store digital ads, where they were going , and what they were searching the most.

“In a nutshell, our technology using small video cameras and real-time computer vision algorithms will record the number of people viewing digital signage and measure traffic flow in a retail store. It will tell store owners how to increase their operational efficiency by analyzing the data from our technology. For example, by knowing that if most clients were coming at a particular time to buy particular kind of goods, stores could increase their conversion rate or sales by deploying more salespersons at that time,’’ Mirza says.

So in 2006, they set up CognoVision Solutions Inc., with Haroon Mirza as CEO, Dr. Shahzad Malik as CTO and Faizal Javer as president & COO.

Even as they were fine-tuning their ideas, the three young men entered the TiE Quest 2007 contest in Toronto.

TiE (whose full form is The Indus Entrepreneur), which was started in Silicon Valley by successful south Asian entrepreneurs to help and mentor start-ups, has dozens of chapters in many countries to help young entrepreneur with guidance, mentorship and venture capitalists. TiE Quest is TiE Toronto’s annual contest to choose budding entrepreneurs and mentor them.

“So in 2007, we entered the TiE Quest contest and finished semi-finalists. That helped us a lot. Our business was financed by an angel investors, we didn’t need venture capitalist,’’ he says.

Suresh Madan, portfolio manager at Excalibur Capital Management Inc. who headed the TiE Toronto chapter at the time, says Mirza and his partners impressed TiE with their ideas and drive.

CognoVision made big strides quickly. It made a big impact at the Digital Signage Expo in Vegas in 2008, and was named Canada’s Most Innovative Company by the Canadian Innovation Exchange in 2009.

And in 2010, Intel offered to buy CognoVision and Mirza and his partners decided to sell it for millions.
“Intel is the digital giant with a global sales and distribution network. We thought that with Intel we will grow much bigger and faster. So that’s how we joined Intel in Sept 2010,’’ says Mirza who now serves as director of business development at Intel.

Isn’t cool? Haroon Mirza and his partners pocketed millions by selling their company to Intel and he is still the top guy at the giant chip maker.

He and his partners have shown that any new immigrant to Canada can accomplish anything if he or she sets sights on it.

They are a beacon for all those new people  who make Canada their home each year.