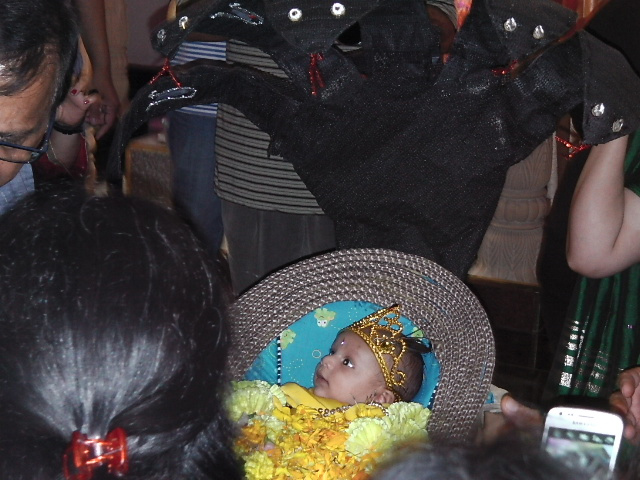 HAMILTON: Over this past Janmashtami weekend, so many people in the Hamilton Samaj Temple were endlessly blessing me. And it was for a simple activity for our Bal Vihar  (youth program) where we did a matki phod in pinata style for kids of all sizes which was a big hit with everyone. And the blessings have not stopped here.

The community members have been countlessly doing so for the last number of months just for such humble attempts at furthering Bal Vihar here. But if I were to reflect over who I believe truly deserves the credit behind the activity’s success, it would be Swami Chinmayananda. And there could be no better time to give him this credit than during his birth centennial year. For across the nation, Swami Chinmayananda was responsible for setting up organized curriculum and programs for Hindu youth to follow. And I had the great fortune of being one of those youth who came from the Newfoundland chapter.

As we were growing up, every Sunday we would go to Mount Pearl for these Bal Vihar sessions. We would read prayer and hymn books which would both be written in English and Sanskrit. We would also learn child friendly bhajans that were 30 seconds long. We would also learn yoga and then we would be excited for our turn to do pooja and lead bhajans. We were a completely child run institution with adults stringing us as puppets whichever way they wanted to.

And between the bhajans and the aarti, we would have personal development time according to our age groups. For little kids, it was about telling one another religious stories or by participating in Godly trivia. For older kids, it was about learning higher values or Sanskrit terms and ideologies. They were also encouraged to take on leadership roles by creating and staging dramas based on Hindu culture. For many smaller special occasions, we would be asked to prepare speeches for them.

Needless to add, many special bonds were forged over a lifetime through such frequent intimate interactions. We were also encouraged to develop ourselves in Bharat Natyam where sometimes both dance and drama were infused. The Bharat Natyam learning would happen during Easter and the summertime for 10 days to 2 weeks at a time. For different occasions, there were fusions of both eastern and western ways to make it easier for the youth to adapt. This included things like doing wakeathons or celebrating Krishna’s birthday with candles on halwa and singing happy birthday. When different Swamis would come, special sessions for youth would also be held in English to help understand ancient wisdom.

Through such interactions, many of us got the confidence in our teen years to be able to explain Hindu concepts to society at large and even dispel myths where necessary. Indeed, though such youth grew up with dual cultural influences, I also observe a great assured sense of identity amidst those who were thoroughly groomed in the system. In our current times, one can’t help but note the traces of Chinmayanandaji’s instilled values in the third generation too which have slowly started to emerge. Mind you, the third generation that permanently remains in St. John’s is small but uniquely creative with the Bal Vihar cause while some other third generation visit annually and display their talents then. In fact, the Bal Vihar fever is so much so that a small number of these second generation parents have started an online Bal Vihar group on skype.

So indeed, Bal Vihar has been taken to a different level and the Newfoundland community continues with their prominence. In fact, while interacting with the local Hamilton Hindu community, I get to realize how much of a brand our Newfoundland Bal Vihar program has become. Oh no wonder, you’re from Newfoundland, some say. I know exactly where you got your Bal Vihar leanings from. For this, I thank our elders and peers who put in countless hours for making Chinmayanandaji’s dream a journey of self-realization for all of us. And in the words of the Chinmaya Mission pledge, may the blessings that flow through us flow to the world around us. Om tat sat.