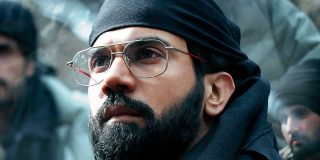 : Hansal Mehta’s film Omerta at the Toronto International Film Festival (TIFF) 2017 recounts the true picture of a radical Muslim, a story of British born terrorist Ahmed Omar Saeed Sheikh, most well-known for his role in the 2002 kidnapping and murder of Wall Street Journal reporter Daniel Pearl  and his involvement with the 9/11 terrorist attacks.

Actor Rajkummar Rao (Queen, Aligarh, Shahid), a recipient of a National FIlm Award and a Filmfare award from three nominations, plays the character of Sheikh, a fundamentalist and well known terrorist.  In 1994, while pretending to be an Indian citizen, a young Omar Sheikh stalked, manipulated, befriended, and kidnapped three Britons and one American. They were held captive with threats of beheading unless the Indian government freed 10 Pakistani militants imprisoned in Kashmir.

Sheikh’s profile would not in any way lead one to believe he was a terrorist.  Coming from a relatively well to do family in London, he has completed two years at the London School of Economics.  Then the Bosnian ethnic conflict takes place in which thousands of people are killed, affecting him to the extent that he wants to exact revenge for the killing of his brothers and sisters.  Instead, through his links at a London mosque, Sheikh is sent to Pakistan, where he is educated in urban warfare, bomb making, advanced psychological warfare and irregular tactics by the leaders of the craft.

In the name of Islam, he distributes his own brand of justice, thinking of himself as a savior.  Wanted by every law enforcement agency in the world, the film shows the bright educated Sheikh beheading Daniel Pearl with such viciousness and cruelty, leaving the viewer wondering how one could gather such hatred in the conscious mind.

The film explores the bare facts and provides a look at trying to understand the mind of a man who is out of touch with the world. A man who lives two lives, a man who has a wife and child, but no friends except those who further his needs and links to various Islamist militant organizations, including Jaish-e-Mohammed, Al-Qaeda, Harkat-ul-Mujahideen and the Taliban.

As the film progresses, viewers are left with an element of disgust, hate, surprise and amazement and leaves one wondering how the son of a loving father becomes an unremorseful religious fanatic, hating with such intensity and proving that one’s greatest weapon is the mind.