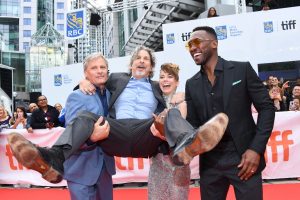 And there was only one Grolsch People’s Choice award winner.  This year it was the film Green Book that walked away with this much anticipated award at the Film Festival.

“And the winner is Peter Farrelly for the film Green Book,” announced Cameron Bailey, co-head of TIFF along with Piers Handling, amidst much applause at TIFF Bell Lightbox on September 16.

The film is set in the 60s starring actors Mahershala Ali (playing Don Shirley) and Viggo Mortensen (playing Tony “Lip” Vallelonga) and tells the story of a working-class Italian-American bouncer who takes a job chauffeuring an African American classical pianist across the American South.   The true story presents a celebrated New York musician who must hire an assistant to drive him on a concert tour through the Southern states because he is unable to travel safely on his own. The musician is Black. His driver is white.

The Italian-American raised in the streets and bars of New York, Tony uses his loud mouth to get his way. If that doesn’t work, he uses his fists. As this mismatched pair sets out on their journey, the Negro Motorist Green Book guides them to safe hotels and restaurants in the segregated South.

The award offers a $15,000 cash prize and custom award, sponsored by Grolsch.

The first runner-up is Barry Jenkins’ If Beale Street Could Talk. The second runner-up is Alfonso Cuarón’s ROMA.

OTHER AWARDS AT TIFF

Honorable mention to Jérémy Comte’s Fauve for its confident visual storytelling and moving performances from the child actors.

Honourable mentions to Anette Sidor’s Fuck You for its acutely observed study of teenage sexuality, and to Emma de Swaef and Marc James Roels’s This Magnificent Cake! for the spectacular level of animation and the surreal humour it uses to explore its complex colonial subject matter.

THE ​PRIZES ​OF ​THE ​INTERNATIONAL ​FEDERATION ​OF ​FILM ​CRITICS ​(FIPRESCI ​PRIZES)

The Prize of the International Federation of Film Critics (FIPRESCI) for the Discovery programme is awarded to Carmel Winters for Float Like a Butterfly.

The Prize of the International Federation of Film Critics (FIPRESCI) for Special Presentations is awarded to Guy Nattiv for Skin.

Honourable mention was awarded to Emir Baigazin’s The River.

The first runner-up is Barry Jenkins’ If Beale Street Could Talk. The second runner-up is Alfonso Cuarón’s ROMA.

The first runner-up is Tom Donahue’s This Changes Everything. The second runner-up is John Chester’s The Biggest Little Farm.