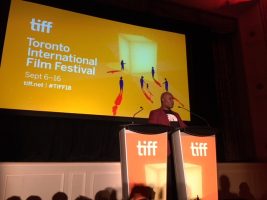 Sandhya Suri’s The Field won the IWC Short Cuts Award for Best Short Film at the Toronto International Film Festival (TIFF).   The UK based Director was all smiles as she thanked the Toronto International Film Festival (TIFF) and the jury for recognizing the film.  The story is about Lalla, a poor agricultural labourer in an Indian village preparing for the harvest of its remaining cornfield.

The film was selected from 36 short films that make up the International portion of this year’s Short Cuts programme.

The lineup of shorts included 14 World Premieres and works from 32 countries, in 19 different languages, with a strong array of new voices. Of the 36 films in the selection, 18 (54%) were directed or co-directed by women.

“Short Cuts is the place to see films that will not only entertain, but also challenge and inspire, from filmmakers who push the boundaries of their craft,” said Lisa Haller and Jason Anderson, TIFF Short Cuts Programmers. “We are proud to continue showcasing work by filmmakers from diverse backgrounds, and this year’s programme has an especially high number of new works from South and East Asia.”