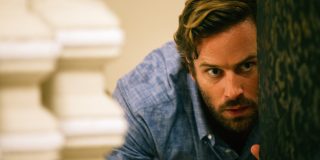 The feature focuses on the events that transpired at the Taj Mahal Palace Hotel, targeted by Lashkar-e-Taiba militants as an emblem of Indian prosperity and modernity. The city erupts, and explosions render much of the hotel a death trap. Gunmen — uneducated, impoverished young men led by charismatic extremists — begin hunting down staff and clients. People in the thick of the maelstrom, people from a wide range of class, culture, and creed must find a way to organize and mobilize in the face of constant peril.

The film vividly dramatizes the Mumbai attacks and takes audiences into the chaos that terrorized India’s most populous city for four days in 2008.  The story does not hold back in its depiction of violence and highlights ordinary people from all walks of life whose responses to this nightmarish scenario reveal the courage and resilience that unite when most needed.

A surprise in the audience was Executive chef Hemant Poddar who flew in with his wife from Mumbai for the screening of the film.  Amidst the chaos of the Mumbai terror attacks in 2011 on the Taj, Poddar showed extreme courage and resilience and was instrumental in saving many lives.  Anupam Kher who played Poddar’s character said he salutes Poddar and others for their extreme bravery and heroism.

“I also salute my friend Karambir Kang, General manager of Taj Hotel, who was helping guests during the carnage while knowing that his wife and two sons were trapped in their room on the sixth floor that the terrorists set on fire,” said Kher.

Patel plays the role of a turbaned Sikh employee of the Taj who also saves lives.

“For me personally, I wanted to do more with the character I was playing and sayo more.  I had read articles about New York cab drivers being targeted and attacked after September 11 attacks and being labelled terrorists.  So I thought we could make this man a Sikh man.  Not only are they a very innocent community, they are  extremely under represented,” said Patel at the press conference.

“We live in an age that seems always to be emphasizing our differences,” says a press note about the film.  “By conjuring this traumatic moment in recent history, Hotel Mumbai reminds us that enduring such situations requires people to truly see each other not as pawns straddling either side of a dividing wall but, rather, as fellow human beings whose best chance is grounded in interdependence. When great danger comes, we are all in this together.”

“It’s a riveting film,” says an audience member at the Princess of Wales theatre at the festival screening.   “What comes to mind is how terror attacks can bring people together in times of need.”