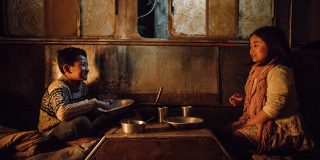 A still from the film – courtesy TIFF

Three Nepalese children get separated from their parents while entering the Indian state of Sikkim and must rely on each other to survive, in Bollywood actor Paakhi A. Tyrewala’s newest work.   The film – Pahuna, The Little Visitors, is produced by Bollywood and now Hollywood actor Priyanka Chopra under her production house banner Purple Pebble Pictures (PPP), will be showcased at the Toronto International Film Festival (TIFF) this year.   The film production house is located in Mumbai and its mandate is to produce small budget films and promote new talent such as writers, actors, directors, and technicians.

Like a contemporary, Indian version of Hansel and Gretel, The Little Visitors perches between realism and fable as it unfolds a story of children performing near-miracles in order to survive.

Amrita and her brother Pranay are forced by armed fighters to flee their Nepali village. Along with their parents, relatives, and baby brother, Bishal, they rush through the forest until darkness and exhaustion force them to stop for the night. An uncle regales the children with fireside stories of Christian priests in long black robes, who are as frightening as any storybook wolf. When the three young siblings get separated in the forest from the adults, Amrita and Pranay must forage for food and find shelter in order to keep Bishal alive. Haunted by their uncle’s story, they also keep a watchful eye out for priests.

The Little Visitors is the latest for Chopra’s initiative in a planned series of films drawn from Indian regions underrepresented on the big screen. The film was shot in the relatively remote Indian state of Sikkim, with an all-Sikkim cast.   Director Tyrewala, who has attempted to capture the innocence and spontaneity of her child actors, is herself an actor whose credits include the films Yeh Kya Ho Raha Hai? (2002) and Jhoota Hi Sahi (2010).

Pahuna: The Little Visitors (2017) is her feature directorial debut.