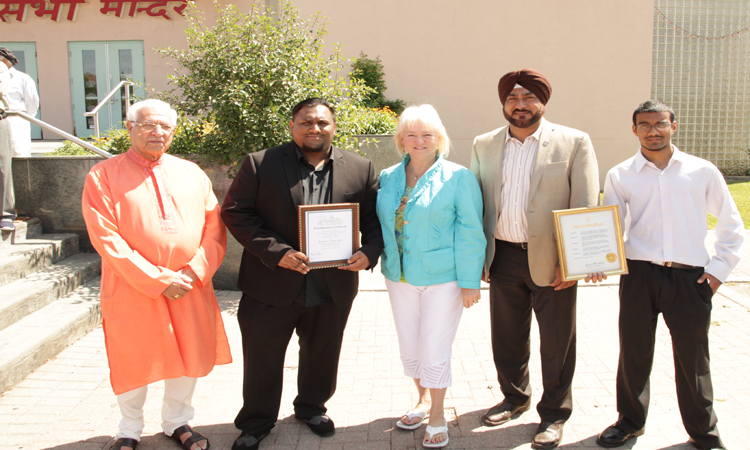 TORONTO: My parents came from Punjab in India to settle in Canada. I grew up in Toronto living with great traditions from my culture.

One of the most important celebrations in India is called Raksha Bandhan. Raksha Bandhan is celebrated by over 1 billion people worldwide, one seventh of the world.

On Raksha Bandhan, we celebrate the bond between brothers and sisters. The sister ties a special thread around the brothers wrist to signify love and protection, as well as to keep evil forces away that might alter the characteristics of the individual.

Our South Asian Community is the largest growing population in Toronto and we are a big part of the Western Culture. Canada was built by immigrants from all over the world. They have enriched Canada with their love of life, traditions and knowledge. We are lucky to say that what makes Canada a place to live is its diversity.

With my love for Mother India and its culture, I realized something was missing from the world. I knew we celebrate Mother’s Day to honor mothers and we celebrate Father’s Day to celebrate fathers, but there was no celebration of the bond between brothers and sisters – one of the most sacred bonds among humans. Because of all the religious elements that Raksha Bandhan has, I took it upon myself to bring Raksha Bandhan from India to Brampton in Ontario.

My friends and I highlighted that Raksha Bandhan is about love and protection by brothers to their sisters. We told people that this bond should be celebrated as Brother-Sister Day. We told people that this Day could be celebrated by all religions and all communities, thus bringing people together like never before, no matter what color or religion o race.

Since the start of my initiative in September 2012 we have been successful in getting Brother Sister Day (Raksha Bandhan Day) proclaimed  in three cities in Ontario. The Cities of Brampton proclaimed it in 2013, and the city of Pickering in 2014. The city of Niagara Falls is making this proclamation on August 29.

Frankly, this small initiative has turned into a movement. I am happy to announce that Niagara Falls will light up PINK & BLUE on August 29 at 10pm to symbolize brothers and sisters and their sacred bond. We are also happy to announce that the major league baseball team – The Toronto BlueJays – will celebrate this “Billion Strong “ movement on September 1 against the Cleveland Indians where I will be throwing out the first pitch which I will dedicate to my brother and nephews whom I lost in a tragic accident.

I am happy that I have been very busy with bringing Raksha Bandhan to Canada. I have written a children’s book for the youth of today and tomorrow and I also wrote and performed a song called Brother Sister Day Anthem with two singers who are a brother and a sister from Pakistan – named Myssah and Ryaan. This song will be on a major radio station in Toronto soon.

(A social activist, author and artist, Daniel Masih lives in Toronto. He is a second-generation Indo-Canadian)