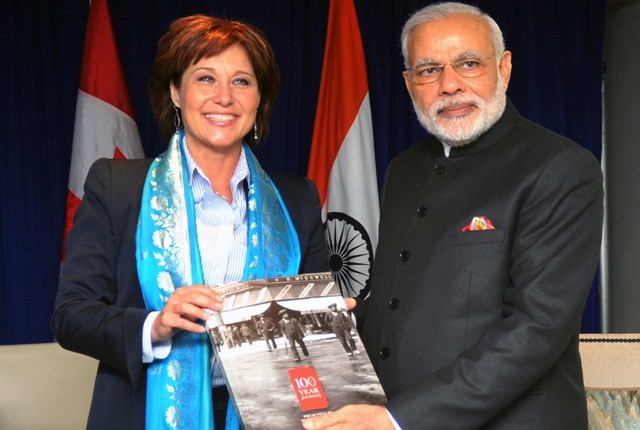 Premier of British Columbia, Mrs. Christy Clark, giving a copy of the book to Prime Minister, Shri Narendra Modi, in Vancouver on April 16, 2015.

But what is not widely known is that many of the early pioneers to Canada were also of South Asian descent. And they paid a heavy price in building the foundations of Canadian society in issues like immigrant rights – voting, housing and shelter.

And now, for the first time their story will be told in an expanded version of the ‘100 year journey project’, first published in 2014.

The experiences of 100 South Asian pioneers will be featured in this version.

Rana Vig is the founder of this project that includes teaching and presentation materials meant for classrooms across Canada. Besides the reprint it will also be published in a digital version where all the stories will be available. This project is made possible by a government of Canada Inter-Action funding of $200,000.

At a launch of Asian Heritage Month in Gatineau, Quebec, Jason Kenney, Minister for Multiculturalism showed his support for the project, saying ‘The South Asian community has played an important role in the building of our country, which is why it is important to preserve and share their stories.”

As did Tim Uppal, Minister of State, Multiculturalism who believes the decision to make the ‘100 Year Journey’ book more accessible to Canadians will increase an understanding and appreciation for early South Asian pioneers who helped build Canada.