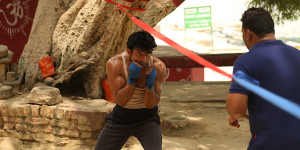 TORONTO: Anurag Kashyap’s film The Brawler (Mukkabaaz) that screened at the Toronto International Film Festival (TIFF) this year is a bold film outlining several layers of issues for boxing in India.   The film narrates the story of a lower-caste boxer who struggles to make his mark on the boxing world and faces challenges at every turn.  It explores the trials and tribulations of the underdog hero, at the same time landing a punch against the injustices and hypocrisies that keep India’s sporting underdogs exactly where they are.

Vineet Kumar Singh, Bollywood actor who rose to fame after playing the role of Danish Khan in the cult movie Gangs of Wasseypur (2012) , played the lead role of Shravan in The Brawler, was injured several times as he prepared for the role of the low caste boxer.

“I had to learn boxing and got injured many times,” he says.  “I took almost a year to prepare for the role.”

The film portrays Shravan slogging day and night to achieve his dream of being a recognized boxer. Things go awry when he falls in love with the niece of his arch nemesis, the head of the state boxing federation. To marry her, he needs a job and for him, the path to a stable government job is through boxing. But Shravan soon finds out that in India, boxing is about everything else but the sport.  He finds challenges at every opportunity including his background from a lower caste.

“Caste system is a big problem here (India).  Even important things work on that basis.  It’s not on paper but in practical, it’s a big issue.  It’s hidden,” says Singh.

Directed by Anurag Kashyap, the film is bold and explores many issues including the sports industry in India, the caste system and the sports quota for getting employment in the government.

“Sports industry in India cannot take medals because the system is so corrupted, so bad.   They don’t let anyone get ahead,” said Kashyap, one of the most influential Indian filmmakers of recent times who has produced various films including The Lunchbox, Masaan, Peddlers, Monsoon Shootout, etc.

Singh agrees that India takes fewer medals because of corruption in the sports industry.

“Because of corruption, good talent is suffering all over, in every game,” says Singh who has great interest in sports and even played Basketball on a National level for Sub Junior and Mini level.   “India is full of talent.  If we want medals, then we need to nurture them (sports talent) from the beginning.”

Even though the film has a weak ending, the film’s heart is in the right place where the filmmaker plays down disability while unflinchingly portraying weaknesses in the system for sports in India. 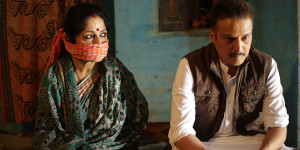