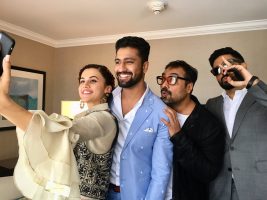 INTERVIEW WITH THE  MANMARZIYAAN STARS 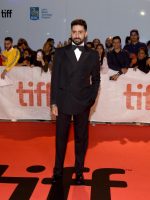 Q. What do you think about your character Robbie in the film?

A. Anurag has always been a visceral film maker, that’s one of his tools that he uses a lot for explaining his narrative. He makes all his films very believable and for his audiences, it’s truly a visceral experience.  I think it’s a very real tactile colourful world of Manmarziyaan.  The character of Robbie actually – I came up with this theory last night – is the only aspirational aspect of this love story and this story is very relatable.  The amount of women who have come up to me encompasses this character who’s really very aspirational. For me personally as an actor, I hope that I can mature into somebody like Robbie and that’s how I describe the character.

Q. Is it easy to live up to the Bachchan name? 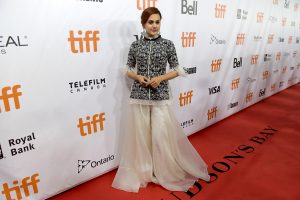 Q.  Where does all that energy come from?

A. I’m just happy in my life.  That’s where it all comes from.  I have always seen that life is half full, not half empty.  So I end up getting all that energy from that.  And whatever work that I do, I’m enjoying each and everything that I do, every second that I work.  I have stopped doing that work that I’m not going to enjoy long back, so now whatever I do, I love.  People may think I’m slogging, but it’s not like that.  I enjoy, so I’m peppy and I’m happy because I’m enjoying each and every film and the team I’m working with.

Q.  Any challenges that you had to overcome for Manmarziyaan?

A.  The biggest challenge is that I’m a very black and white person in real life.  I have very fixed list of dos and don’ts.  My character Rumi on the other hand has no such list. She is thriving in the grey zone in which she can do whatever she wants to, regardless of the norm. And most of the time, this is probably not right from anyone else’s point of you.  Most women -.we are so burdened with doing the right thing, making the right decision and I also, as a human being do that, consciously or unconsciously that I feel I need to do right. So Rumi on the other hand will do whatever she wants .  Therefore, to make my audience still love me, I’m not doing something that’s socially correct. They might not approve of what this girl is doing, what she’s taking but I cannot afford it if the audience does not connect with me. That was my biggest challenge and something I was not sure of that made me do the film.  Otherwise, everything else might be conventional, easy, especially doing the part where you have to own your mistakes and still make the audience fall in love with you.

Q. How was it to work with Abhishek Bachchan and Tapsee Pannu?

A. It was wonderful.  Abhishek I was really looking forward to working with them because I had no idea the kind of energy he would bring to the table.  I’m aware of all his work and am a huge admirer of his so I was very excited as a fan to work with him.  Abhishek such a gentleman, he loves to take care of people around him, and he loves to respect people around him. He’s just a jovial guy.  He likes to keep people smiling around him and that’s a great nature to have and that’s something I really really do admire about him.  And that chivalry reflects in his work

About Tapsee… It was the first time I was working with Tapsee.  I had seen only one film of hers – Naam Shabana so I had no idea what energy she would bring as an actor.  And when I started to get to know her,and started interacting with her, I knew how true she is to the character she played and that was wonderful.  It was like working with Fire and Ice.  Here is this energy where you dont know which direction the fire is going to go in terms of performance also. So as an actor you are so alive that you don’t know what you are going to get in return.

With Anurag sir, I have had collaboration with him before.  I started my journey in the film industry as Assistant Director to him in Gangs of Wasseypur. So he’s been a principle of the school that I have learnt in.  It’s been a wonderful experience knowing him because every film that we work on be it Bombay Velvet, Raman Raghav or Manmarziyaan, I feel that there is something new I learn in me, I explore something new in me and that’s wonderful as an artist.  I keep praying that I continue to work with him every 4/5 years to feel rejuvenated . 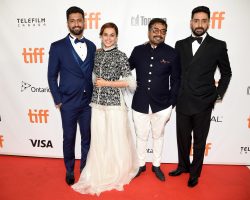 SNIPPETS OF CHEMISTRY BETWEEN THE DIRECTOR AND THE CAST

Abhishek Bachchan – “Toronto has always been special for me.  The last time I came to Toronto, I proposed to my wife.”

Vicky Kaushal – “I would love to play a character where Anurag does not let me remove my clothes.”

Tapsee – I think that’s like a cheap thrill of Anurag. Every two scenes, he would say remove your shirt.  I’m amazed as to why this guy (Vicky) is not embarrassed when Anurag is saying ..achcha utaar…!  I don’t know what he (Anurag) is fantasizing about when he looks at his back.”