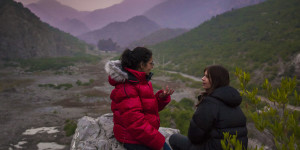 TORONTO:  Azmaish – a Journey through the Subcontinent, a film by Sabiha Sumar, is a passage through rural Pakistan and urban India. In this documentary, Pakistani director Sabiha Sumar and Indian actor Kalki Koechlin take a revealing journey through India and Pakistan, uncovering the common humanity beyond the divisive political rhetoric.   The two, who raised more than Rs. 20 lakhs for the documentary from 120 people on a fundraising platform, travel and inform as close friends, about the currents of history, economics, and culture that speak about the present moment in Pakistan and India.

Not a film about diplomatic strife between India and Pakistan, Sumar travels the two countries asking questions that roll up into one monumental concern: how did growing fundamentalism bring Pakistan and India to the same dangerous threshold?

In Pakistan, Sumar visits a rural landowner whose property is home to a million people. He has much to say about Islamic fundamentalism, less about feudalism

Sumar met Koechlin a year ago at the Mumbai Film Festival (MAMI) and mentioned she wanted to do a film to help her explore the rise of Hindu fundamentalism.  They speak with vocal advocates for India as a Hindu state, each woman despairing at the decline of secular thought and the narrowing of expression they see in both nations.

Koechlin says she saw a lot of new things as she travelled across Pakistan.

“I found it interesting to travel through Pakistan.  Karachi is only 90 minutes by air from Mumbai, yet there is so much fear of going to Pakistan,” said Koechlin who attended the film’s premiere at the Toronto International Film Festival (TIFF).

“It was seeing this feudalism.  A lot of things were edited in the documentary, like we kept asking people what are your dreams?  What would you do if you could do anything?  And one huge difference in India and Pakistan was this that in India, no matter how poor the person was, they had some idea of where they wanted to aspire to. Whereas in Pakistan, in some of the poor places in Pakistan, there was really like ‘no why should I dream, why should I have a dream’.  There was this sense of hopelessness,” says Koechlin.

Asked about India at the film’s screening at TIFF, Koechlin said talking to corporates was difficult.

“One of the most difficult parts in India was to speak to corporates because we wanted to see the developing India as well.  We have a right wing government in place and one of the promises of this government is big economic development.  We wanted to speak to some of the big major players in that respect.  But as soon as they heard what the documentary was about – India Pakistan – everybody shied away from that”, said the Indian actress.

Koechlin also addressed the issue of violence on women in India.

“India has a very strong secular identity.  That’s why in India there is so much rise of violence against women because women are becoming empowered, because they are out there competing with men for the same jobs and very much taking control of their lives and that poses a threat to the old order where a woman was at home and basically free labour,” she said.

But at the same time, India is a free nation, she said.

“I believe that India is a free nation.  It’s a democracy.  There is definitely a change, but as a nation, we are very demanding and diverse.  We speak different languages, and are in search of that Indian identity.   We are struggling to get out of colonialism and being free, even as we find our own identity.”

Koechlin quotes the truism about her country: “Whatever is true in India, the opposite is also true.” The same holds across the border.