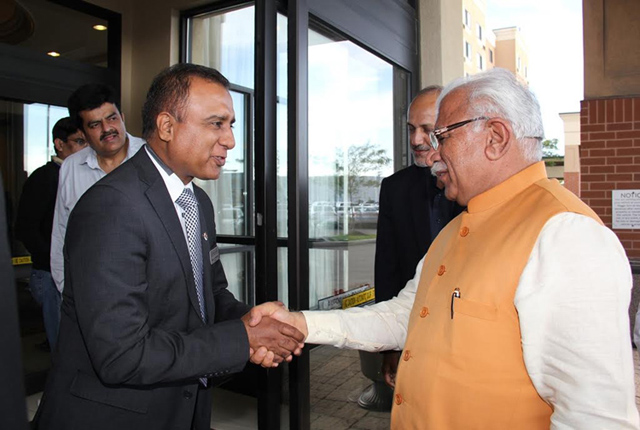 TORONTO: India-Canada relations are poised for a leap growth in the coming years, says the Indo-Canada Chamber of Commerce (ICCC).

The premier trade and business body between the two countries says the visit of Prime Minister Narendra Modi here in April has put the growing bilateral ties on a fast track.

“Canada was not willing much to engage with India till a few years ago when it supported India in the Nuclear Suppliers Group in 2008. After that, things started moving and we signed the nuclear deal in 2010. During the past four-five years, our relationship has really taken off,’’ Indo-Canada Chamber of Commerce president Sanjay Makkar tells IANS in an interview.

Modi’s visit – the first stand-alone visit to Canada by any Indian PM in 42 years – and his chemistry with his Canadian counterpart Stephen Harper who spent almost 50 hours with him – was a new milestone in the bilateral relationship and the two countirs , says Makkar.

“Modi’s visit has started a new era in India-Canada relations. So much is now happening in our relations. Canadians are showing a lot more interest in India now. More top-level delegations have started visiting each others’ countries to explore new areas of cooperation. A FICCI delegation is coming here later this month, with its focus on infrastructure investment, large projects, real estate, etc.,’’ and Canadian trade missions are going to India,” says the Indo-Canada Chamber of Commerce president.

Because of new streamlined Canadian immigration rules, he says, more and more skilled Indians are able to come to Canada. “On the other hand, Canadian universities and colleges are rushing to India tie up with Indian institutions and even set up campuses there. Many of them have signed exchange programmes with their Indian counterparts. The number of Indian students in Canada has suddenly grown many fold – from a mere 3,000-4,000 just a few years ago to almost 30,000 now,’’ says Makkar.

Pointing to the start of direct Toronto-Delhi flights by Air Canada from November as another sign of the deepening bilateral ties, Makkar says tourism will be another big area between the two countries. “We at the Indo-Canada Chamber of Commerce have just created a tourism and hospitality committee to focus on this vital area.’’
He says once India and Canada sign the Comprehensive Economic Partnership Agreement (CEPA) it will unleash the true potential of their bilateral relationship. “CEPA has been under discussion for some time as Canadians have apprehensions about red-tapism, corruption, etc. But India now recognize that Canada is an important player for it as it has the resources and knowhow in the areas – infrastructure, renewable energy, education -which India is focusing on. The two governments are keen to sign CEPA at the earliest.’’

Per capita, the Indo-Canadian community is the biggest Indian diaspora group anywhere in the world. “Indo-Canadians have become visible everywhere and hold top positions in so many areas. They are a big factor in our growing India-Canada relations,’’ says the chamber president.